~ A Rendezvous to Remember ~

Plunge into the angst of the early Sixties: the Sexual Revolution; the Cold War; Vietnam; Civil Rights; and the contentious 1964 election.

Join Army brat Ann Garretson as she sparks an airmail romance with Jack Sigg, a West Point graduate guarding the Czech-German border. They hatch a summer rendezvous in Europe, each hoping the romantic tour will seal their love in a match for the ages.

Meet Ann’s best friend, Terry Marshall, a fiery conscientious objector. He helps her plan the European escapade, but then irretrievably falls in love with her. Four lonely weeks after his wistful goodbye, he proposes marriage – by mail. His letter throws all three of their lives into the turmoil of a seesaw rivalry between two men with strikingly different visions for the future.

Join the young lovers for a Rendezvous to Remember – a tale of three idealists, two love affairs, one Corvette Sting Ray, and a European adventure at the dawn of the Cold War Sixties. 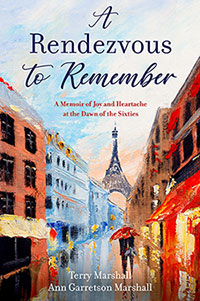