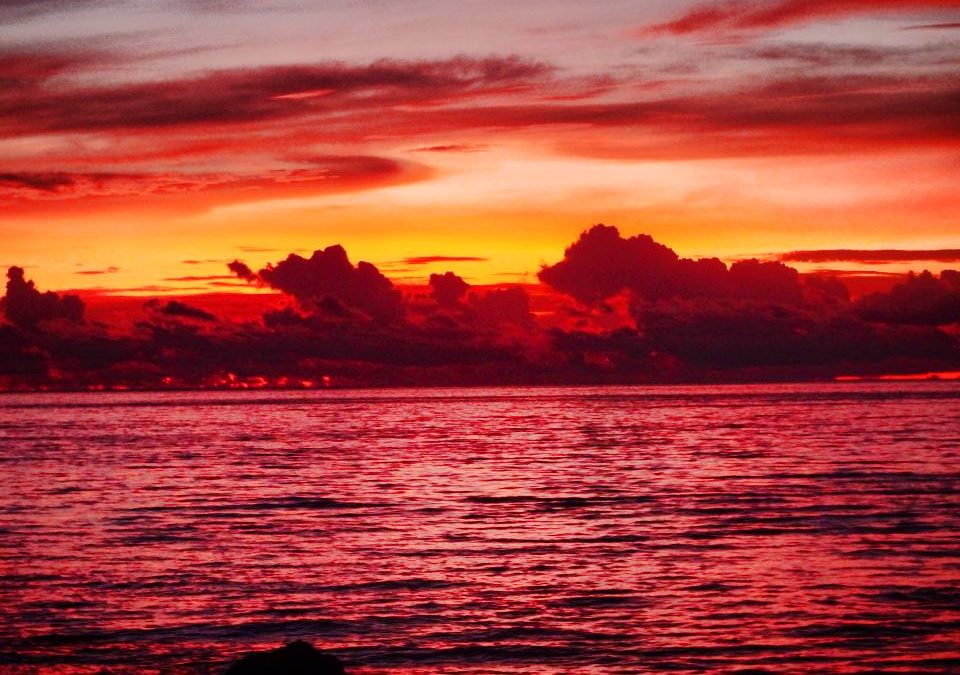 I had my own enchanted moment a couple of weeks ago, during a community performance of favorites from Rodgers and Hammerstein’s music. At the first strains of “Some Enchanted Evening,” I sneaked my hand into Terry’s and fell in love all over again.

I’ve been humming that and other tunes throughout the days since – like the haunting “Bali H’ai” and the zany “I’m in Love with a Wonderful Guy” — corny as what, Kansas in August? Yes! The songs are from the hit stage play and movie, South Pacific, a tale of two wartime romances.

For me, the music evokes memories of enchanted evenings, graceful palms, and sand between my toes from years we’ve spent on beaches in Hawaii, the Philippines, and the Solomon Islands. I would return to any of those places in a heartbeat.

South Pacific is more complicated than an enchanted evening on a balmy south sea beach, however. It’s the story of two couples coming to grips with ingrained prejudices – cross-cultural and racial – that threaten to derail their love. An American lieutenant is so in love with a Polynesian woman he wants to stay on Bail H’ai after the war is over. By contrast, the young nurse from Arkansas is in love with a Frenchman – until she finds out he has children by a Polynesian mother. Nurse Nellie drops her Frenchman like a burnt croissant. Enchanted evening derailed.

The lieutenant lashes out at the cultural barriers to the lovers, as he complains in song that prejudice is “taught” from a very young age:

Happily Ever After – or Heartbreak?

From our years in the South Pacific, Terry and I also know something about cross-cultural and interracial romances. We knew Peace Corps Volunteers and other expats who overcame such barriers to love. Like any other romance, some married and thrived. Some didn’t.

Cross-cultural romance was a controversial idea in the 1940s, 50s, and 60s. Even today, I look around and ask: Who taught this new generation to be afraid, and to hate? To shoot first and ask questions later? To exclude people of color? To engage in name-calling and bullying? To hunker down in racist groups? To fear and hate people who don’t look like us or talk like us.

I admit, parts of South Pacific are quaintly dated, but it’s a powerful story about an issue that’s as relevant today as it was more than half a century ago — and a film worth seeing, both for the music and the message. Bali Ha’i calls, folks. Take a few minutes to listen to some of the music.

Women’s Equality? We HAVE Come a Long Way!

As I grew up, I thought women’s equality was an “of-course-we-are-fact”, not an “issue.” My mother had had a professional life for 10 years before she married Dad. She worked for U.S. Senator Dennis Chavez until she was 30, splitting her time between Santa Fe and Washington, D.C. She was smart, confident, and capable.

Mom and Dad brought me up expecting to obtain a college degree and believing I could do whatever I set my mind to. In the ferment at the University of Colorado, the nascent movement for women’s equality seemed a natural progression to me and my gal pals, not an anomaly.

How little I knew!

In 1962, prompted by Eleanor Roosevelt, President Kennedy established the Commission on the Status of Women. First task: Figure where women’s equality stood in American society.

Now, 56 years later, I’m astonished at how many things I was not expected nor even allowed to do in 1962:

Surprising? Yes, indeed. Read this and so much more in Judith Nies’ THE GIRL I LEFT BEHIND.

Learn from Past; Celebrate Progress

And remember: The battle for women’s equality is not over. We still have work to do, as evidenced by a newer cause for foment: The #MeToo” Movement. See one of my recent blogs on this topic.

Meanwhile, let’s celebrate what progress we’ve made toward women’s equality. As Loretta Lynn reminds us, we HAVE “come a long way, Baby” — and enjoy her music at the same time.