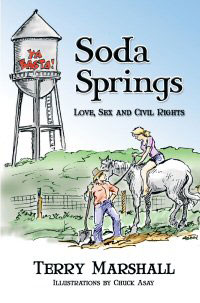 The name of the novel? Soda Springs: Love, Sex, and Civil Rights.

The story in a nutshell: after a hormone-driven college guy, Rick Sanders, fails to sell Martin Luther King’s civil rights message to his backwater hometown, he plunges unwittingly into a bare-knuckle battle for Mexican-American equality.

Soda Springs is set in 1963 in an imaginary town in a southern Colorado mountain valley. That year, King led the controversial children’s crusade in Birmingham, Alabama, that made national headlines when the police sicced dogs on Negro protestors, and firemen blasted them with high pressure fire hoses. It was also the year of King’s famous “I Have a Dream” speech. Both events play important roles in Marshall’s novel.

In brief, college senior Rick Sanders commits himself to King’s civil rights campaign in Birmingham. But when Rick’s father crushes his leg in a tractor accident, Rick begrudgingly returns to Soda Springs to save the family farm. He vows to make the best of it: he will enlighten the hometown folks with Dr. King’s message.

Rick discovers a town beset by decades of racism, mired in hatred, and himself in the cross hairs of warring factions. He confronts a world of prejudice, discrimination, protest, and violence. His reward: shattered dreams, love, sex, rejection, and finally, redemption.

Soda Springs is a civil rights story, but it’s also:

Soda Springs is illustrated by Chuck Asay, a nationally syndicated political cartoonist who grew up in Alamosa and now lives in Colorado Springs. Marshall has been an editor, newspaperman, Peace Corps country director, activist, and Head Start Director, and has a Ph.D. from Cornell University. He grew up in Center, and now lives in Las Vegas, NV.

One of Asay’s illustrations is a map of the northern half of the Sangre de Cristo Valley, and includes the towns of Del Norte, Monte Vista, Alamosa, and Hooper. Soda Springs is located about where Center is found on most maps.

Why “Soda Springs” instead of Center?

“Center’s real; Soda Springs is imaginary,” Marshall said. “The book is fiction, not a memoir. It’s not my life’s story. I didn’t want anyone in the Valley to think any of my characters are them. Or that I’m Rick Sanders, the story’s protagonist I never did half the outrageous things Rick does in the novel. No way.”

Published by Friesen Press, Soda Springs: Love, Sex, and Civil Rights is available in hardcover, paperback, and e-book editions from Amazon.com, and the author’s website. Excerpts, background information, and photos not included in the book may be found on the author’s websites: www.TerryMarshallFiction.com or TerryAnnMarshall.com.