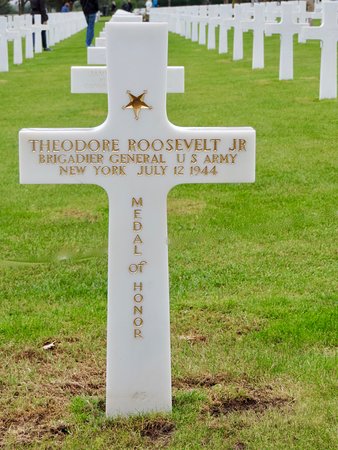 On Memorial Day, we pause to reflect on how fortunate we’ve been through the years to have lived and worked in several foreign countries – three years in the Solomon Islands and two in the Philippines as a married couple; a year in Italy for Ann as a teenager. One result: a treasure-trove of great memories of those locations.

Each year, Memorial Day reminds us how truly fortunate we’ve been – we’ve always come home from our foreign travel. Many Americans have not – hundreds of thousands of them died overseas in American wars, including the eldest son of President Teddy Roosevelt.

Today, on this Memorial Day, we think back on two solemn afternoons we spent at American World War II cemeteries abroad – one in Manila; the other in Normandy.

Manila’s 152-acre American cemetery is home to 17,184 American graves. Gleaming white markers stretch in precise rows as far as the eye can see. The day we were there, blood-red Poinciana blossoms puddled the grass among the silent rows. In addition, a curving cluster of 20-foot high marble tablets lists another 36,286 names of those missing in the Pacific Theatre in World War II.

Both cemeteries plunged us into the past. We walked silently – visitors don’t chitter chatter in these sacred spots. We read the names carved into the gravestones. We wondered about who they were, how they died, how their families coped when they didn’t come home. And again we were thankful that our fathers survived their wars. Sobering places, these cemeteries!

On this Memorial Day, we sadly note that these cemeteries and monuments memorialize a relatively small portion of the 418,500 Americans who died as combatants in World War II . . . and the 50,000,000-plus men, women, and children of the Allied nations who died in that war. Yes . . . FIFTY MILLION!

Also, as we pause on Memorial Day, we remind ourselves that not all American Army veterans were in fact Americans. Let us introduce you to two vets we had the honor of knowing: Sir Jacob Vouza, a Solomon Islander, and Teofilo Ripalda, a Filipino: 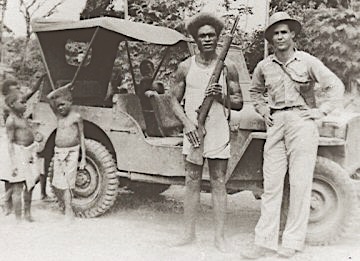 Jacob Vouza’s peaceful life on tropical Guadalcanal in the remote Solomon Islands was upended in 1942 when the Japanese captured the island in their march across the Pacific toward Australia. When the U.S. Marines landed on Guadalcanal in August 1942, Vouza, a retired policeman, joined them as a scout. On “a mission too far,” the Japanese surrounded and captured him. When he refused to divulge information on U.S. Marine forces, his captors tied him to a tree, bayoneted him, slit his throat, and left him to die. Vouza chewed through the ropes, then crawled and stumbled miles through the jungle and raging battle to report enemy positions to his company commander.

He was made an honorary Sergeant Major in the U.S. Marine Corps, awarded an American Silver Star and Legion of Merit, and the British George Medal for gallantry. In 1979 he was knighted by Queen Elizabeth. After the war, Vouza named his tiny village on the Guadalcanal plains “California.” The photo is of Vouza with Col. George Tuck, taken on Guadalcanal, 1943.

Thirty-five years later, Vouza befriended us, and we him, when we were co-directors of the U.S. Peace Corps program in the Solomon Islands. You can read a bit more about Vouza in Terry’s essay, “By Canoe into My Father’s War”. Vouza is also the subject of two books: VOUZA by Hector MacQuarrie (Macmillan 1948), and WHERE THE SUN STOOD STILL: The Untold Story of Sir Jacob Vouza and the Guadalcanal Campaign (Toucan 1992)

Imagine a 65-mile forced march of 76,000 captured soldiers – 12,000 Americans and 64,000 Filipinos – through a sweltering jungle to be dispatched to wretched prisoner-of-war camps in the Philippines, China, and Japan.

Our friend Teofilo Ripalda was one of those Filipinos who endured that march – World War II’s infamous Bataan Death March. For those who may not recall, after the April 9, 1942 Japanese rout of U.S. and Philippine forces, the captives were starved, beaten, shot, beheaded, or simply left to die during that 5-day march.

Some 23 years later, Terry and Teofilo became friends as fellow teachers at the Leyte Institute of Technology, Tacloban City, Philippines, where Terry worked as a U.S. Peace Corps Volunteer. Besides working together on the “Faculty-Employee Club,” the school’s teacher-staff union, they chatted daily over morning merienda (coffee break), where, over time, Teofilo gradually told of the horrific details of the death march.

Fortunately, both Sir Jacob Vouza and Teofilo Ripalda survived World War II and lived long, productive lives. But what a price they paid for their – and our – freedom!

Memorial Day is a day to honor men and women like Jacob and Teofilo, as well as for those Americans who died in service to our country.