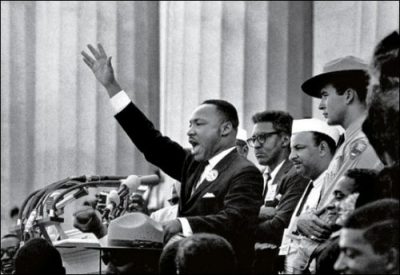 Today was supposed to be the big day in Washington, D.C.: dedication of the new Martin Luther King National Memorial on the Mall. Postponed by a hurricane named Irene. But the Memorial is up, a new mecca for visitors. I’ve added it to the long list of reasons to revisit Washington one of these days.

Forty-eight years later, I can still hear Rev. King’s “I Have a Dream” echoing over the Washington mall. I didn’t make it to D.C. that day – I was off in backroads Colorado . . . actually I was on the road, wending my way over a narrow mountain pass en route home, listening to the March on Washington on the radio.

I wasn’t the only country bumpkin moved by King’s speech. Take Rick Sanders, the protagonist in my novel, Soda Springs: Love, Sex, and Civil Rights. He was farming that day, caught up in thoughts of how difficult life had become, about . . .

No, wait, King’s “I Have a Dream” changed Rick’s life forever. Rather than tell you how, let me show you: the following is from Soda Springs. Here, you can read it for yourself:

Wednesday morning, the belching Case drowned out Rick’s anguish over the barrio’s defeat. But then, the tractor’s beat began hammering out strike chants: “two, four, six, eight, who we gonna liberate? Cis-co, Cis-co, Cis . . .”A jackrabbit bounded alongside the tractor and zigzagged into uncut alfalfa; next round she would be in his path. The tractor was Soda Springs: relentless.

By noon, clouds formed over the Sangres and rolled toward him. He chomped down two baloney sandwiches as he drove. Even if he finished mowing before it rained, he wouldn’t have time to rake, let alone bale. No matter what, he would leave Friday for Cornell.

Midafternoon, shiny rain splotches dotted the hood. Lightning flashed. Thunder crashed, and rain pummeled him. He raced for the shop.

He flipped on KSCV: Lil Baker’s inane clubs report, “Valley Do-ins.” He jockeyed the radio to KOA-Denver: a pitch for Chevys. Then, mellifluous Walter Cronkite came through the static. “Mr. Randolph has come back to the podium, he . . .”

August 28. He had forgotten.

Mahalia Jackson sang a cappella, and a roar drowned out the last echoes of her song. Cronkite said it was hot and two hundred thousand people had been crammed into the mall for hours. A rabbi came to the podium. Rick imagined Charlie popping jokes, Deb beside him, all goo-goo eyes.

Outside, the rain let up, but the yard oozed goo. No more mowing today.

Cronkite again: Dr. Martin Luther King, Jr. next. Rick wiped down the Case as if it were a prize foal. Through the static, King cried, “Some of you have come fresh from narrow jail cells.”

Rick chimed in, “And others from sopping wet alfalfa fields.”

King said he dreamed about the red hills of Georgia. “My dream is that Concha will come with me to the gorge-studded hills of Ithaca,” Rick replied. Man, that was stupid to ask her to live with me. She’ll never speak to me again.

Even over static-encrusted KOA, King wrung nuance from every syllable, turned pauses into insights. He’d been jailed, beaten, stabbed. Yet, he dreamed on.

“With this faith we will be able to work together, pray together, struggle together, go to jail together.” Little shouts of joy punctuated his words: Amen. Amen, Lord.

“Let freedom ring from the mighty mountains of New York . . . from the snow-capped Rockies of Colorado.”

Wow, King zipped from Washington into Pop’s very shop and shifted into overdrive. The static melted away.

“From every mountainside, let freedom ring . . . from every village and hamlet, from every state and every city . . . speed up that day when all of God’s children, black men and white men, Jews and Gentiles, Protestants and Catholics, will be able to join hands and sing in the words of the old Negro spiritual, ‘Free at last! Free at last! Thank God almighty, we are free at last!’”

King’s dream rolled down from Lincoln Memorial over the crowd, crossed the Sangre de Cristos, gathered in the San Juan foothills, and came to rest in a tiny cementerio beside the old Catholic church at Las Piedras.

Every village and hamlet. Protestants and Catholics. Mexicans and whites. Farmers and farmworkers. Freedom together, not separately.

“Continue until justice rolls down like waters and righteousness like a mighty stream.” Keep it up until you free the Cisco Kid, until justice hunts down Tommy’s murderer.

Rick knew the barrio couldn’t right the wrongs of history in one summer; racism ran too deep. But they had to struggle on. Martin Luther King demanded it. Soda Springs’ battle had only begun, and Dr. King called on him personally to join him: You out there in the Rockies, in Soda Springs, Colorado. You, Rick Sanders.

At last, the summer made sense. Rick’s mission wasn’t in Birmingham, nor Washington, D.C. Go back to the Rockies, to Sanders Farms in your little village of Soda Springs. That’s where he was meant to be. And not only for the summer. Dr. King committed himself to a cause greater than himself; that was his dream.

Rick had failed this summer in part because he dreamed of lust, not justice. He had to stay and fight with Concha, even if it cost him his family and earned him white Soda Springs’ eternal hatred. “So long, Cornell. It’s been nice.”

A double rainbow broke through the haze. Rick’s hay lay water-logged. At best, raking was two days away. No matter. He could rake and bale next week.

“Thanks, Martin, if nothing else, I’ll get Pops’ hay up this summer.” He sharpened the mower blades and gassed the tractor. He had to be ready for every ray of sunshine.

Rick raced for town to deliver his vision to Concha.

En route, he sobered up. For a few euphoric moments, Martin Luther King trumped reality. Concha would eviscerate him. Am I some puta to live with you in sin?

Worse, she would have told Elias and Nacho. You gringos beat us, so now you dare ask Conchita to be your mistress?

They would come for him with Espino’s cutters, brandishing their razor-sharp lettuce knives. Nah, he was being melodramatic.

He pulled up to Concha’s house, and a new thought struck. What if she chose Chicago? He would not only lose her, he would be left behind to face the cavalry by himself.