MLK Day: a day for Whites and Blacks 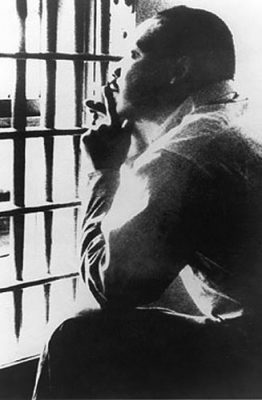 Another Martin Luther King Day came and went last week. We celebrated. We listened again to “I Have a Dream.” We held parades and dinners and social gatherings and applauded the glowing remembrances.

And, of course, a number of us raced off to the malls to pony up hard-earned dollars at those “MLK-special” sales that have proliferated over the years. Any holiday is a great day to shop in America!

This year’s MLK Day was exceptional for me: I was a guest on three radio stations that day – WUTQ, Utica, NY; WKCT, Bowling Green, KY, and WCCO, Minneapolis – talking about Martin Luther King’s heritage, nonviolence, how those principles apply today, and how these all are embodied in my novel, Soda Springs: Love, Sex, and Civil Rights.

I normally spend my days in front of a computer, writing. This year I said more publically on MLK Day than I’ve said all year.

My main point in all my MLK Day talks was that all of us – Whites as well as Blacks – have reason to honor Dr. King. Why?

That point seemed so simple and straightforward I thought it almost an affront to spell it out.

But this past weekend our local newspaper ran a letter to the editor that confirmed our need to remind ourselves that Dr. Martin Luther King’s message is for all Americans, not only for Black Americans.

The letter writer praised a couple of her white coworkers for having wished her a happy MLK Day. She was astonished. She wrote, “How can two white people be perfectly at ease with expressing and accepting such a holiday greeting that didn’t apply to them specifically?” (emphasis mine)

She went on, “This exchange between coworkers proves that one doesn’t need to respond with bitterness to such greetings that may not apply to them.”

OK, let me be clear here: Black Americans justifiably should be proud of Dr. Martin Luther King, Jr. and his leadership in the Civil Rights movement. He and those who marched with him changed the course of American history. That heritage is central to MLK Day.

But King changed my life as well . . . and I’m a white guy from a small farm town in southern Colorado.

In short, Martin Luther King Day is my day, too. I celebrate it – as we all should – because MLK was an inspiration for us all.