A Fairytale Castle in the Air

Ann, supplement to A Rendezvous to Remember, Ch03: Castles in the Air, June 12, 1964, two hours out of Landshut, Germany 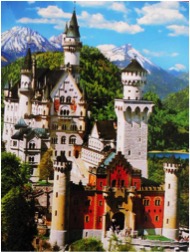 Neuschwanstein is a fairytale castle for the ages—both in its dramatic appearance on the Romantic Road through Bavaria, and on its lavish interior. It looks familiar to Americans because Cinderella’s castle at Disneyland is modeled after this real-life palace. And I can’t help it: Every time I see a picture of this castle, “It’s a Small World After All” worms its way into my head, playing on continuous loop. And I don’t mind. Its message of “peace through understanding” is as relevant and significant today as it was when it was launched in 1966.

My recollections of my 1964 visit to the original fairytale castle still make me smile. Read on:

The romantic road teased the foothills of the Bavarian Alps. The azure sky played cat and mouse with the lush mountains, alternately dipping into gorges and up forested hillsides, then dancing on jagged peaks. Jack pulled over at the sight of the fairytale castle of Neuschwanstein, perched impossibly on a cliff above the Pöllat Gorge, its spires disappearing into the clouds.

Neuschwanstein: A Fairytale Castle on the Romantic Road

The castle was more breathtaking than when I toured it with Dad and Mom in 1957. King Ludwig the Second of Bavaria built the castle as a stage on which to perform Wagner’s operas, particularly Lohengrin and Tannhäuser. His indulgences eventually tagged him as “Mad King Ludwig.”

We toured both Neuschwanstein and Ludwig’s castle at nearby Linderhof. In room after room, we were awestruck by bronze sculptures, intricate mosaics, crystal chandeliers, life-sized porcelain figures, rich tapestries, expansive murals, and jewel-encrusted furniture.

In one chamber, we saw ourselves repeated endlessly by mirrors on all sides, vanishing into infinity.

Jack guided me in a circle, and whispered, “Look. We, we, we, we, we – forever. What a glorious thought.”

« « Spat at the Louvre
Assassinated? Our President? » »