Spat at the Louvre

Ann, supplement to A Rendezvous to Remember, Ch07, Postmark Silverton:

Hard to imagine why anyone would have a spat at the Louvre, right? No, it wasn’t about different views of Art. Nor about nabbing a ruffian pickpocket. Nor even about tired feet and a grumbling tummy.

Nope, my spat at the Louvre was more ignominious: My mouth got ahead of my brain, and I said something really stupid.

So travel back in time 54 years with me when I was still caught in a tangle between Jack Sigg, my “intended”, and Terry Marshall, my best friend. Terry had helped me plan that European rendezvous with Jack, then, at the last minute, had concluded he should be my soul mate.

He threw all three of our summers into a turmoil.

Nevertheless, Jack and I went ahead with the rendezvous. Mostly, it was a fantastic adventure, but it did have its moments, like this little . . . 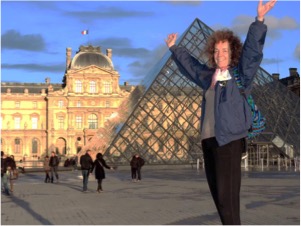 Ann leaping for joy at the Louvre in 2014. She didn’t say a single stupid thing. She thinks.

The Louvre loomed cold and uninviting. Its stone exterior and granite public square made a drab welcome. Inside, we took the tour—I couldn’t possibly remember all the masterpieces Terry insisted I see. Nor would I dare to relay his suggestions to Jack.

Yet, fewer than twenty minutes in, as I circled the Venus de Milo, I blurted, “Terry said we should study this piece from every angle to get the full impact.”

The pained look on Jack’s face stopped me short. He stood as frozen as the sculptures around us. “Oh, Jack, I’m so sorry. I didn’t—”

A small muscle in his jaw twitched. I bowed my head against his arm. He jerked it away.

At tour’s end, we circled back for a longer look at Mona Lisa. We pushed into the crowd to get a closer look. Jack muttered, “I know why she’s smiling.” His first words since my thoughtless remark at the Venus de Milo.

I cocked a cautious eye toward him. “You do? Why?”

“She has two suitors. If one doesn’t work out, she can reel in the other, just like—”

It hit me like a blow to the jaw. My eyes darted daggers. Was he trying to be funny?

“In case you’re keeping score, you’re way ahead,” I growled.

We clumped our way back through the Grand Gallery, side by side, but not together.

I ground to a halt. “Neither of us wants this. Let’s go outside. We need to talk.”

“Only the two of us? No third-party rivals?”

Jeez, how much of this can I take? “I can make that promise only for myself. Can you?”

“Of course!” He expelled it out like a wad of day-old bubblegum.

Fifty Years On: No Spat at the Louvre

Fifty years later, Terry and I visited the Louvre together, and I managed to get through the whole thing without saying a single stupid thing. At least, as far as I can recall.

« « Traipsing Europe Has Its Moments
A Fairytale Castle in the Air » »