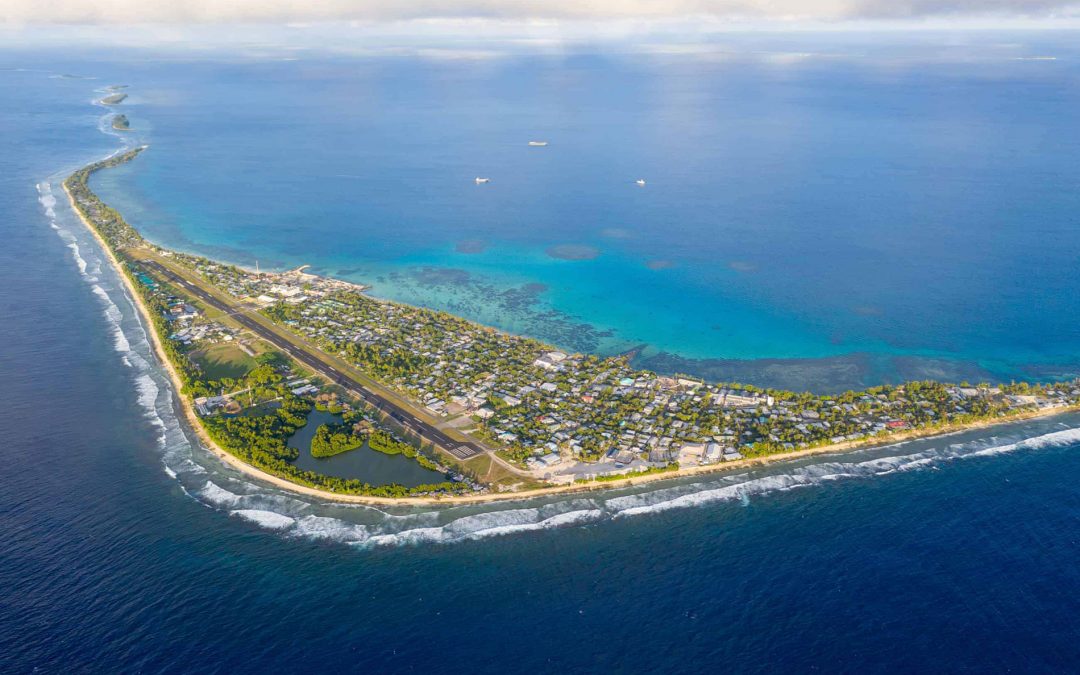 October: We rejoice—our high temperatures in Las Vegas are in the two-digits at last!

We’re thankful for the cooler weather, yes, but October also sparks memories of another unforgettable date from our Peace Corps years: October 1, 1978—Independence Day in the tiny South Pacific nation of Tuvalu. 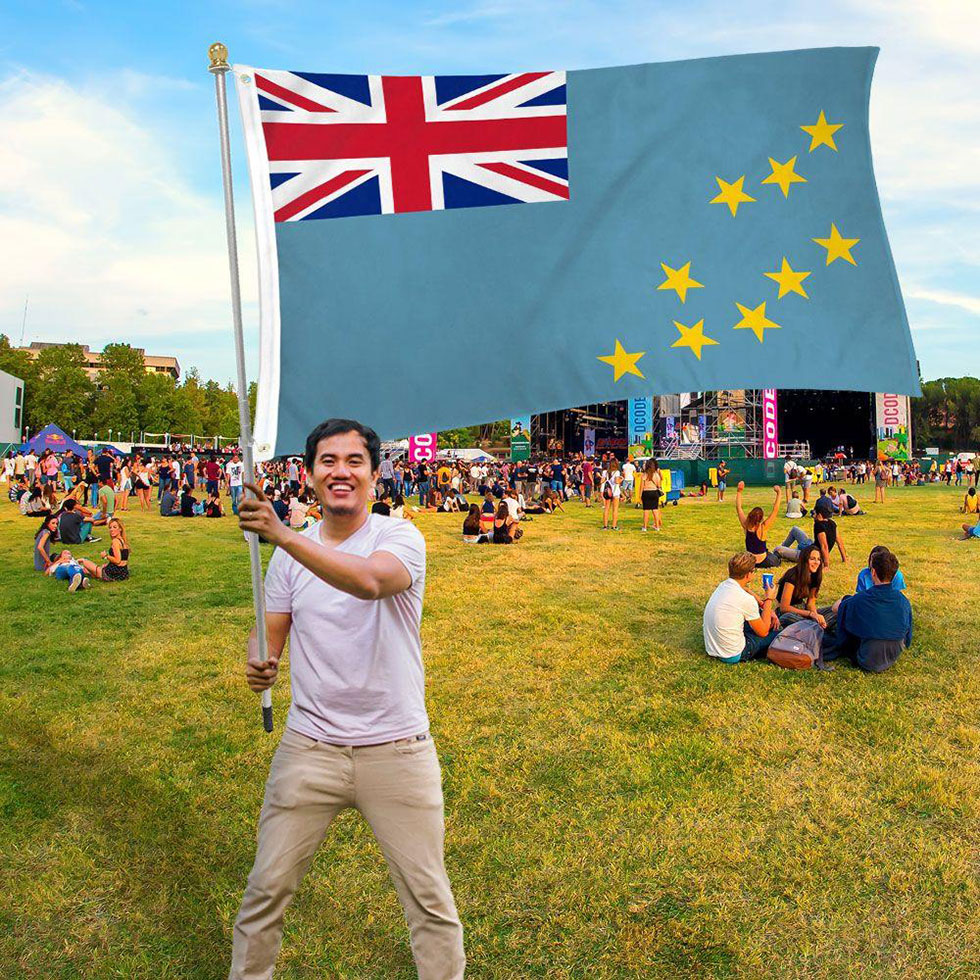 We stood in silent awe that afternoon as Great Britain’s Union Jack officially descended for the last time and faded into history. Around us, Tuvaluans cheered as their new flag ascended the pole for the first time.

What a thrill to be on hand when a nation gains its independence! A day to remember—and what a fete!

Good questions. Here’s a bit of context before we join the festivities:

A tiny chain of remote coral atolls in the vast Pacific

Formally the Ellice Islands, Tuvalu (pronounced Too-VAH-loo) is a chain of nine small atolls (coral and sand islands) in the west-central Pacific, halfway between Australia and Hawaii—660 miles north of Suva, Fiji. The chain stretches for 370 miles across 500,000 square miles of ocean. Total land mass: 10 square miles. The 1978 population: 7,300. The 2019 population: 11,600.

It’s tiny. It’s remote. It’s the tropics: hot and humid. And these days it’s in serious jeopardy from climate change.

How so? Today, as the Pacific Ocean rises, it eats away at the shorelines. Tuvalu has no rivers or mountains—the nation’s highest point is 16 feet above sea level. Just below the coral and sand surface, a subterranean lens of fresh water floats above the salt-water infused coral base of each island. This life-sustaining fresh water is usually replenished during the mid-October to early April rainy season. But rising sea has begun to pollute the lens with salt water. In drought years—more frequent these days—fresh water has become a scarce commodity. The country is losing both land mass and the fresh water vital to existence.

Invitation to Independence: A hearty welcome

In the late 1970s, as co-director (with Annie) of Peace Corps programs in Tuvalu, Kiribati, and the Solomon Islands, I represented the Peace Corps at Tuvalu’s independence celebration. I flew into Tuvalu’s capital of Funafuti with the American delegation, where Tuvalu’s prime minister, all the top government officials, and a crowd of local folks met us on the airport runway.

Like a cadre of Polynesian majorettes, eight young women—clad in traditional grass skirts, brightly colored blouses and colorful “grass” streamers—paraded us through a friendly “gauntlet” of two rows of 100 villagers, outfitted in equally colorful attire. 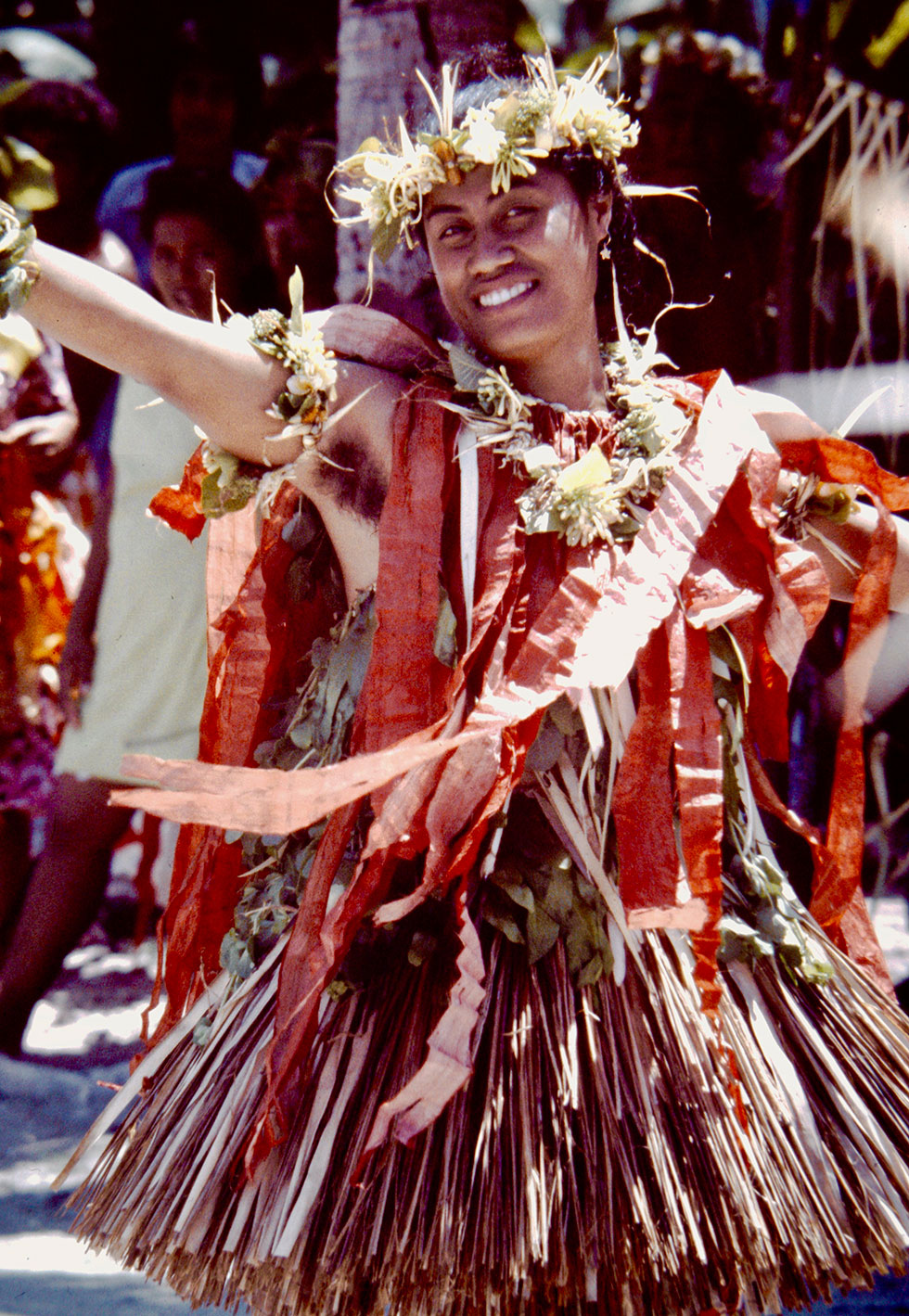 It was a five-minute leisurely stroll from the airport runway to the country’s sole hotel. It offered five double rooms, and was only ten yards from the lagoon (the side of the island more protected from wind and rough seas). Behind us, another 150 grass-skirted men and women followed—all dancing and singing as we paraded our way from the runway to a welcoming reception.

After a reception, we gathered for a welcoming feast in the island maneapa, the huge, thatched-roof, open-sided traditional village meeting house. We sat tailor-style on plaited mats at “tables” designated by intricately woven mats spread on the floor in front of us. Across from each of us, a young woman set out a finger bowl for washing our hands, then sat stoically facing us, fanning away both the heat and the flies as we ate—one brightly-dressed caretaker for each of us.

And oh, the food! Grass-skirted men delivered the feast. We each got a whole chicken, a filet of newly smoked tuna, a bowl of clam stew, roast pork, rice, five big pieces of various types of taro, a dozen bananas, three types of locally made sweets, and two freshly cut coconuts (for drink). Each of us! And no doggie bags.

The gift of companionship in a land with few amenities

Funafuti is Tuvalu’s capital “city.” It’s a tiny atoll, 593 acres—that’s smaller than many of the family farms where I grew up in Colorado. Its population is 2,100. No cafes or coffee houses. No theaters. No shopping malls. No bookstores. No TV or newspaper. No tourist diversions—typically the entire nation gets fewer than 100 foreign visitors yearly. Tuvalu has no traditional industry. Its people raise their own food—they’re sustenance gardeners and fisherman.

I spent the two days before Independence talking Peace Corps business with Tuvalu and Kiribati officials, and chatting one-by-one with our three volunteers. Twice a day we visitors gathered in the maneapa for the daily feasts.

Early mornings and late evenings I strolled alone along the lagoon shoreline, down the runway and into the palm forest beyond the village. In those early morning hours, and at night, friendly voices rang out greetings from the darkness.

Each night we gathered in the maneapa for three to five hours of traditional dance—packed in tightly with villagers, as if we were part of the performance rather than audience, again sitting on hand-made “grass” mats on the  concrete floor. Everyone was singing—not just the dancers. A bank of men pounded out the rhythm on six-foot-long wooden drums, five-gallon tin cans, and by slapping their thighs. I didn’t understand the words, but the joy was irresistible, and the chorus of male voices mesmerizing. The maneapa pulsed. We were one, a single vibrating being, like a human beehive.

On Independence Day—October 1—Britain’s Princess Margaret presided over the formal hand-over. We listened to speeches. We cheered silently (in deference to the British royalty and resident expats still on hand) as the Union Jack came down. We congratulated our hosts, shook hands, chatted about how great freedom from foreign domination felt.

Those feasts spark vivid memories, as have those nights packed shoulder-to-shoulder in the maneapa with the citizens of Tuvalu, singing in their independence. The melody of independence remains an unforgettable refrain, underscoring their pride of Independence on October 1!—Terry

Featured Photo: Fongafale Island, home to the Tuvaluan capital, Funafuti. Note that the runway extends the full length of the populated part of the atoll.