My Airmail Boyfriend Was No Male Chauvinist Pig 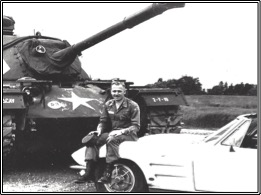 Jack in ’63: The Lieutenant with his Wheels

“Jack transcended my highest hopes. In the top five percent of his West Point class, he was an Airborne and Ranger schools graduate, one of the first in his class promoted to troop commander, an invitation in hand to teach math or tactics at West Point, his choice. Charming. Considerate. Witty.”

“Better yet, our letters revealed he would be a stalwart supporter of my own career goals and would see me as an equal partner in achieving his. He was no ‘male chauvinist pig’—the ultimate epithet for men too blind to recognize women’s talents. A bonus: we had the same values about love (precedes sex) and marriage (a life-long commitment). I could flourish with Jack. I knew Army life—as the daughter of a career officer, I was an Army brat.

“Our correspondence blossomed like a century plant, as if the seeds had been gestating all along. Jack began to sign off with Love, then All my love. His letters and audiotapes became steeped in unabashed love. How could I resist such declarations as these?”