Can a Pup Tent Tale Lead to Romance?

This is a pup tent tale I hate to think about: fifty-four years ago, on June 30, 1964, Ann set off from Landshut, Germany, on the first day of her “Grand Tour” – a two week road trip through Germany, France and Italy with her boyfriend, Lt. Jack Sigg in Jack’s 1963 Corvette Sting Ray.

Late that afternoon, near Strasbourg, France, Jack takes a side road into a wooded area and stops for the night by a small, grassy-banked lake. No one around for miles.

Uh, oh . . . It’s their first night on the road. No hotels in sight. Ann’s a bit nervous: She and Jack are close . . . but not that close. Certainly not close enough for romance in a pup tent!

I Have No Clue about This Pup Tent Tale

Meanwhile, I have no clue. I’m in Colorado. I’m not going to learn about this pup tent tale until 50 years later when Ann’s sits down at her computer and recreates the scene for our joint memoir. Here’s an excerpt from how Ann describes that scene:

Tales from the Pup Tent

Well, they slept in that tiny tent that night, Ann and Jack did – that night, and several others. And the tent becomes the setting for some key scenes in the memoir – some romantic; some filled with tension, anxiety, and misgivings; others hilarious.

As we work on the memoir, we wonder how realistic those scenes are. Ann asks herself,  Was it really an Army pup tent? And as small as I remember? 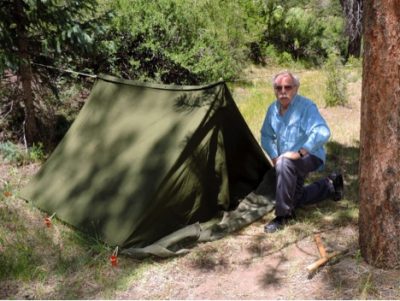 Terry, wondering about romance in a pup tent

Ann agrees: We both know that the most unexpected sight or sound or smell or taste or touch could open a floodgate to memories of this pup tent tale long forgotten. We’ll make sure every detail of Ann’s tale is as accurate as possible.

So we buy the real thing: a genuine United States Army surplus pup tent – two pieces of canvas that snap together into tent walls. No floor. Musty smell. Tightly bundled with stakes and ropes and no instructions. We take it with us to Colorado, camp out in the San Juan foothills not far from my hometown of Center, Colorado.

We scout out a nice spot in the forest, roll the tent out, flatten it down, anchor the stakes, string the ropes between two trees. Then we stand back, study it carefully:

I think: Yikes, exactly as I feared — side-by-side, zippers facing. HE would have been well within fondling range.  And with more than enough room for maneuvers aplenty.

« « MLK and Me on Red Mountain Pass
The Joy of Christmas » »