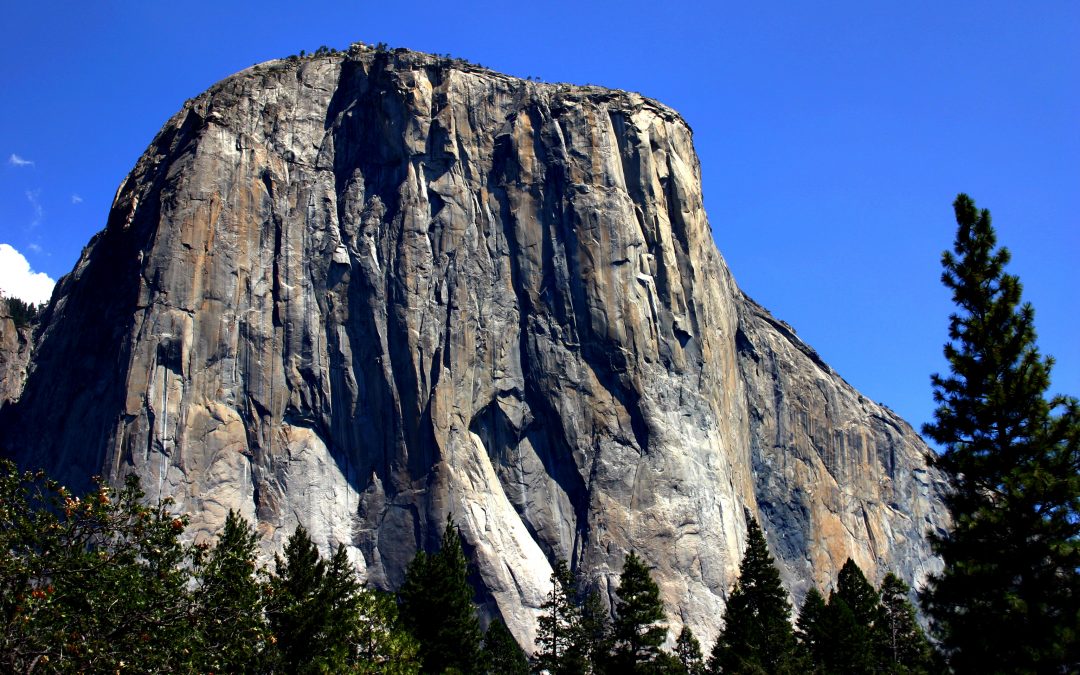 Challenge for super-athlete-mountaineers: Free Solo Climb of El Capitan, Yosemite National Park. Photo by, and with thanks to, Mike Murphy

Ready to dream big? Imagine stepping your full weight into invisible toeholds on a granite face when the nearest horizontal surface is thousands of feet below. Now, reach into imperceptible notches in that same rock face and use them as finger-holds to help you climb the vertical surface of Yosemite Park’s El Capitan, a 3,000-foot-high vertical granite mountain . . . no ropes, no safety net . . . just pure strength, guts, skill, preparation, and dogged persistence.

These were the stock and trade of a super-athlete-mountaineer Alex Honnold”s big dream, as portrayed in the documentary, Free Solo, when he climbed that famous mountain. We watched that film, Annie and I, last week, and we highly recommend it.

No surprise, the ending of the spell-binding Academy Award-winning documentary, Free Solo: Alex Honnold makes it to the top of Yosemite Park’s El Capitan, a 3,000-foot-high vertical granite mountain . . . no ropes, no safety net . . . just pure strength, guts, skill, and dogged persistence. Alex is the only one who’s ever done it.

But I’ll tell you, Annie and I sat there gripping our seats. What if he slips? (He doesn’t. Whew!)

Set aside images of Maypoles and dancing maidens; and red flags and marching workers. Hold those thoughts of May Day for a moment, and come meet an old friend of mine: a mountaineer, film maker, and an inspiration.

On this historic day in American mountaineering, James Whittaker became the first American to reach the summit of Mount Everest.

These days, Whittaker gets all the coverage, but the 1963 expedition included 19 Americans—including Barry Corbet; 32 Sherpas; 909 porters, 27 tons of supplies. Six Americans and Sherpa Nawang Gombu made it to the summit: Whittaker, Norman Dyhrenfurth, Barry Bishop, Lute Jerstad, Willi Unsoeld, and Tom Hornbein.

Corbet’s Decision of a Lifetime: I Dream Big, But No, You Go First

Barry Corbet could have, but he didn’t. Barry was climbing with Unsoeld and Hornbein after Barry’s partner Jake Breitenbach died in an icefall lower on the mountain. As the three

planned the final assault, they realized they had enough oxygen for only two. Barry urged them to go on without him: “You two have been climbing together, you know each other. This is my first Himalayan expedition. I’ll be coming back,” he said.

After Everest, Barry resumed his life as a mountain guide, skiing instructor, and entrepreneur in the Tetons. Then, in 1968, while shooting a ski movie near Aspen, his helicopter crashed and he was left paralyzed. He was 31 years old. He never walked again.

How Did I Meet Barry Corbet? As a Filmmaker

So, how did I know Barry? Come with me to my hometown, Center, Colorado. It’s fall 1971. At Head Start (I’m the director), we have set aside the weekend to build a creative playground for the kids. Scores of parents have given up two days to dig, haul, saw, hammer, and build. We use local materials: a car body, tires, lumber, ropes, sand—no commercial swings or slides or hard plastic forts. A wooden climbing structure arises from the ground. The parents strip the car, pound out rough edges to make it safe for 4-year-olds to “drive”. At lunch and dinner we gorge on homemade tamales and tacos.

A friend from Boulder comes to record us at work—16 mm home movies and dozens of still shots. He recruits a friend of his in Golden, a professional filmmaker, to produce a movie for us. No charge.

A few weeks later, my friend’s friend—Barry Corbet—invites me to his home/studio to view his first cut. He greets me like an old friend. After the preview, he whips up a spaghetti dinner. We drink. We talk—about the movie, about Center, and a bit about his own life. Paralyzed from the waist down, Barry operates the wheelchair like a master. We talk on and on. I stay overnight.

Barry Corbet and New Big Dream: “Most Active Gimp Ever” 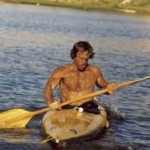 After a helicopter accident, Barry Corbet took up kayaking, co-produced a hundred films, and became editor of NEW MOBILITY, an advocate magazine for people with disabilities.

Barry had lots of tough times, but he didn’t give up. He wanted to become “the most active gimp who ever lived.” He took up kayaking, co-produced a hundred films, and became editor of NEW MOBILITY magazine, an advocate for people with disabilities.

I never met Jim Whittaker, but I’ve always been inspired by that 1963 expedition. And when I think of May 1, I think of Barry Corbet. His name, too, not to be forgotten.

Oh, and if your heart can stand it, take a few minutes to get acquainted with Alex Honnold of Free Solo fame: http://www.alexhonnold.com/heaven.

Alex and Barry are men of big dreams, dreams they dared to put their lives on the line for.  I have an affinity for both men because I, too, love the mountains. No, my mountain adventures have never risen to their accomplishments, But I still cling to memory of a breath-taking trip over Black Bear Pass near Silverton, Colorado. Read about it here.—Terry