Stunned by a Frenchman’s Gratitude 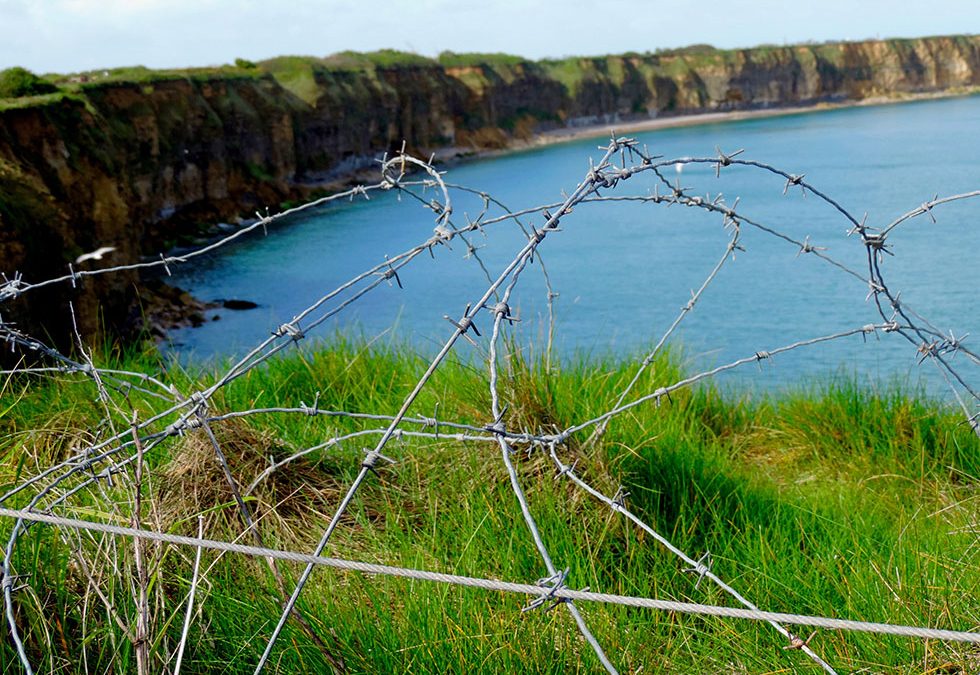 Exactly 77 years ago today, on D-Day, nearly 160,000 Allied troops stormed the beaches of Normandy to turn back the tide of Nazi Germany’s campaign to dominate Europe during World War II.

A chance encounter in 2010 with a Frenchman and his teenage son smacked Annie and me with a gut understanding of how that day in 1944 lives on, even today. Our encounter was far more powerful than any video we’ve seen, or any textbook we’ve read.

We were strangers, sharing a table at a busy picnic ground at Arches National Park, near Moab, Utah. We chatted. He was from Normandy. 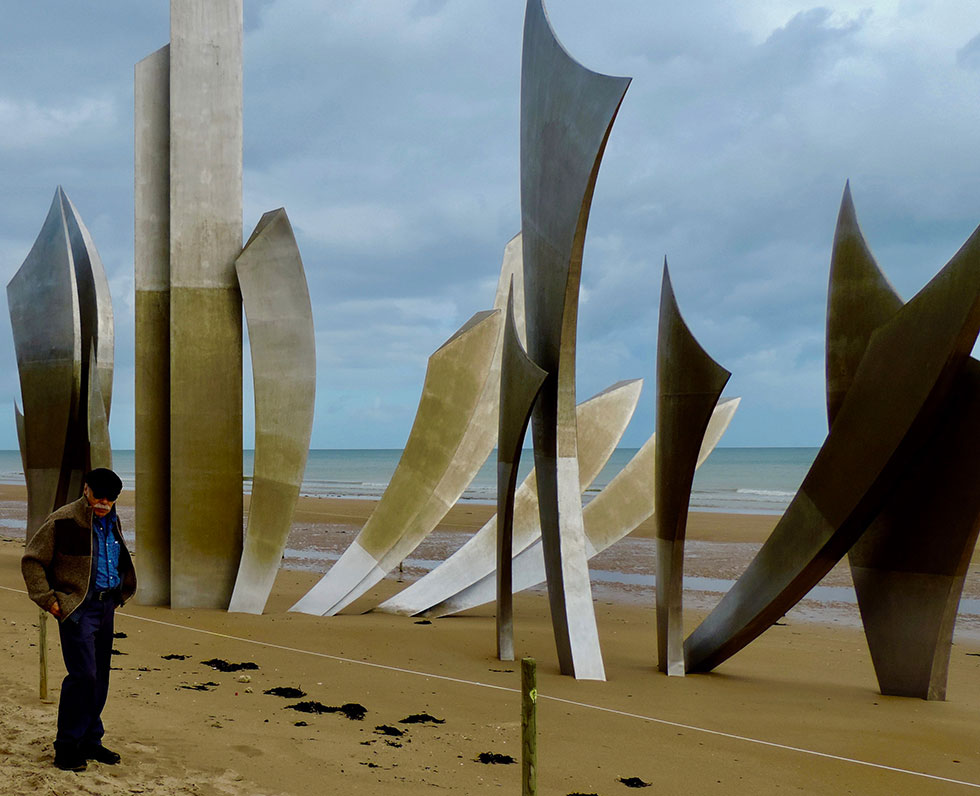 “Every year, I take my son to the cemetery at Omaha Beach,” he told us. “We walk among the headstones. I point to the names.

“We will never forget what America did for us in those days,” he told us.

His words gnawed at our consciousness. Finally, on a cold, drizzly, windy spring morning several years later, we made it to Normandy. 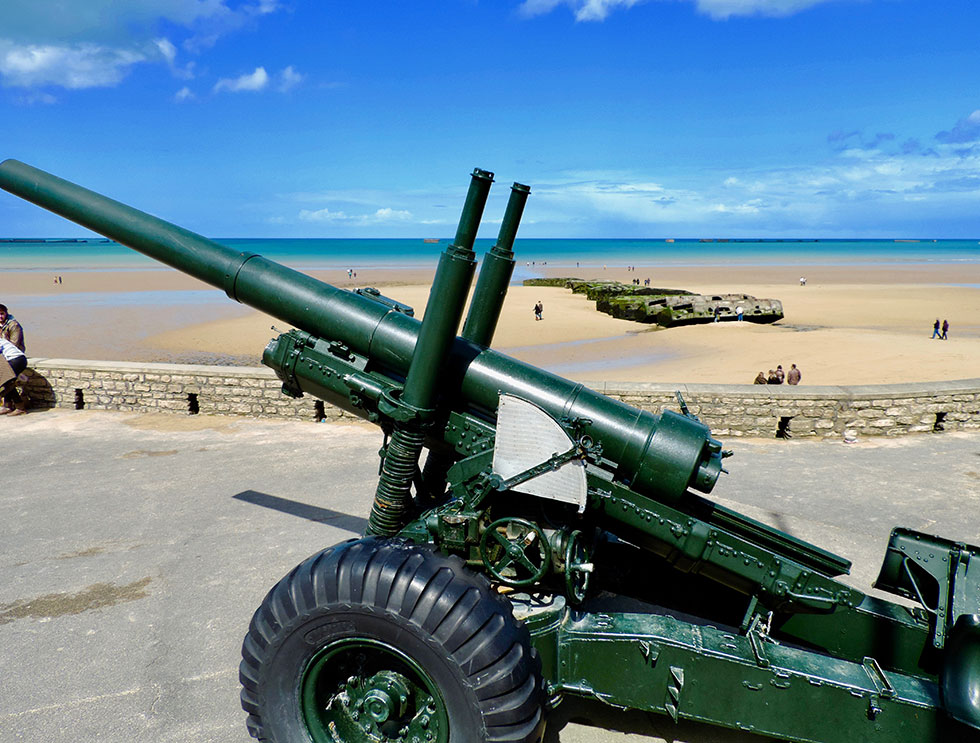 Here, we survey the coastline from Pointe du Hoc. The big 155-mm German cannons that rained death on American troops storming Utah and Omaha beaches below, on that June 6, 1944 day have long-since been removed. The German observation bunker keeps a weary vigil on the outermost edge of the 100-meter-high cliffs, weathered, and stripped of all amenities.

From here, German spotters had a commanding view of both beaches. The bluff is still scarred and pocked with American bomb craters.

Before this, we had learned something of World War II from dear friends around the world. We lived for two years in the Philippines, near the beach where MacArthur waded ashore and honored his pledge, “I Shall Return.” One of my co-teachers survived the infamous Bataan Death March. His stories are seared into memory.

Years later we lived on Guadalcanal, where US Marines halted the Japanese march toward Australia. We’ve hiked on Bloody Ridge, site of one of the fiercest battles. And once we found an unexploded American bomb in the jungle. A small sign identified it: “Danger! Unexploded Bomb!” We gave it wide berth—we had heard of other bombs that had maimed, and even killed some Solomon Islanders.

We also spent many a day in Tarawa, capital of Kiribati and site of a devastating Marine battle in 1943.

And, in Hiroshima, we were struck speechless at the shadow-like impressions on building walls of men vaporized by one atomic bomb, Little Boy.

But here at Normandy was a battle that dwarfed any combat site we had ever seen.
Normandy was the largest seaborne invasion in world history. From across the English Channel, the allies sailed 6,939 vessels: 1,213 warships, 4,126 landing craft, 864 merchant ships, and 736 ancillary craft.

Nearly 160,000 troops crossed on D-Day alone, some 875,000 by the end of June. Here at Pointe du Hoc, specially trained rangers scaled the sheer cliffs while under fire, then battled their way through German lines. Of this elite unit of 225 men, 135 died in the assault.

On sandy Utah and Omaha Beaches, American soldiers had to sprint, wade, or swim ashore through fields of German hedgehogs, log impediments, mine fields, barbed wire, and withering machine-gun fire from bunkers strategically placed to lay down overlapping lines of fire. Allied casualties on the first day alone were estimated at 10,000 men, including 4,414 confirmed dead.

By summer’s end, the Normandy invasion cost the American, British, and Canadian allies 40,000 men. Germany lost 60,000 troops. An estimated 14,000 French civilians died as war swept through their villages and farms.

Here in Normandy, we creep into concrete bunkers and peer out into the Channel as the German defenders must have done in the face of that massive assault. We tread softly through the American Cemetery with its 9,387 graves and the memorial, which lists the 1,557 men missing in action. 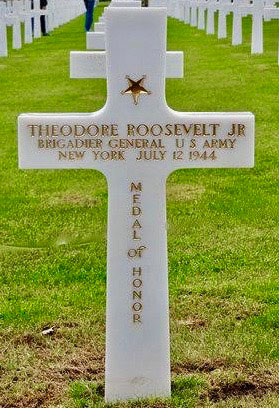 Here and there, a single fresh rose rests against a gravestone. At one, a young man is kneeling. We study myriad exhibits of battle scenes, military hardware, and battle facts in the visitor center museum, and marvel at the logistics required in those pre-computer days to mount such an undertaking.

I’m a conscientious objector. Ann rejects violence, sees mediation as a better way to resolve conflict. But we know this: We don’t have to disown our own beliefs to honor and respect a soldier’s courage.—Terry

« « In Memory of Those Who Never Made It Home
We Need Action: A Lesson From the Sixties » »